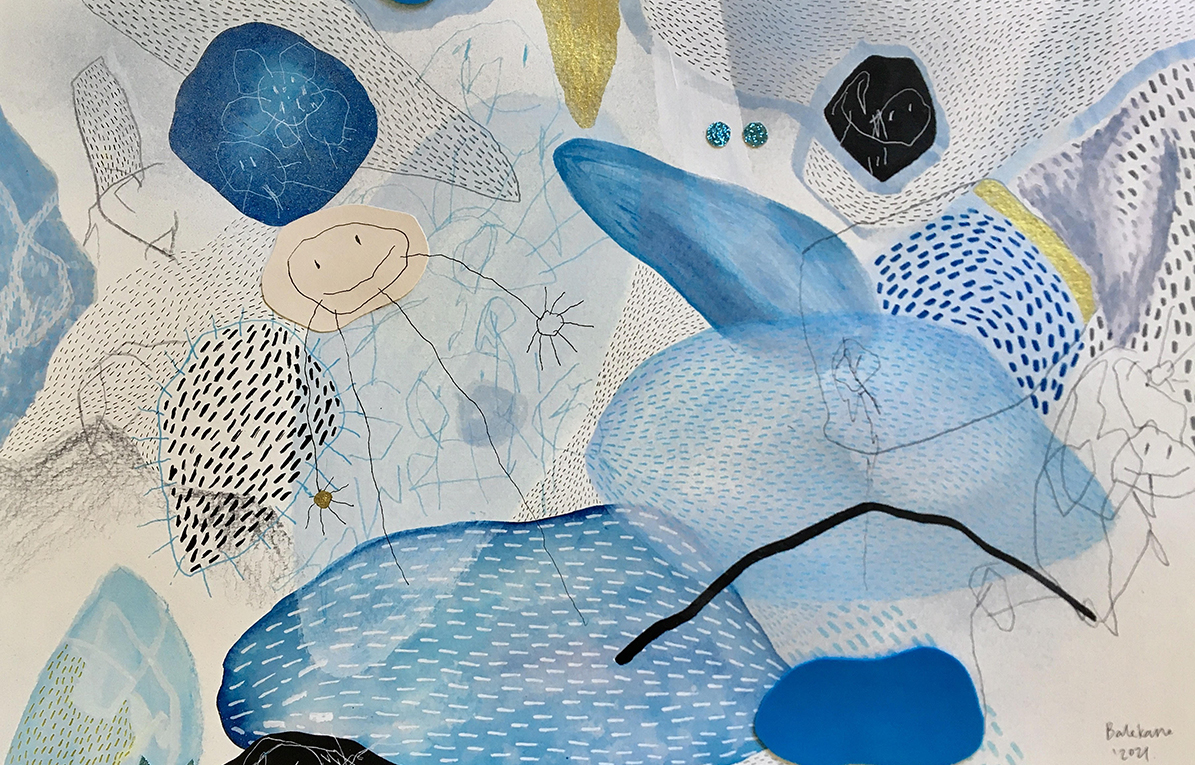 Bad people live in the house across the train tracks. That’s what Ma says. She says it’s chock-a-block full of druggies and neglected children. Sometimes when we drive past Ma flicks her hand and says, Now there’s a bad lot. I don’t want you playing with those kids, do you hear? They’ll make you sick. Other times Ma looks away and makes a sound with her tongue. Shame, she says. Poor things.

The house is rectangular. Bricks have fallen out the wall and the windows are cracked and weeds push through the brown wire fence. In the yard there’s loads of fun stuff to play with. Broken plastic toys, stripped tyres, an oily lawnmower. Once I saw a lady hanging up washing. She was very fat and very slow. Like a slug, said Ma. Four rows of pegs were clipped to the front of her t-shirt. She lifted a big yellow jersey over the line and held it there and unclipped a peg and fastened the jersey in place. The clothes were bright and colourful. Ma says they’re cheap. Ma likes to wear sad colours. Black, grey, lonely blue.

Ma says it’s disgusting, really disgusting, the way some people raise their children. Like those druggies across the train tracks. She says people like that shouldn’t be allowed to have kids. One time we drove past their house and there were lots of children outside. They were chasing each other around with their mouths hanging open. Their hair was full of knots and their faces were dirty and they were laughing. Ma made her eyes small. Would you believe one of them spat at the lady from the library, she said. Actually spat. She shook her head. Ma’s hair is very blonde and straight, and when she shakes it, it goes wish-wash across her back. When the car windows are down and she’s going really fast, her hair streams behind her like sunlight. It’s that golden and shiny. But we hardly ever drive with the windows open. Ma says there’s too much pollution out there, too much gunk and smelliness. We use air conditioning instead.

Whenever a beggar comes to the window Ma stares straight ahead and pretends they’re not there. Don’t make eye contact, she says. You’ll just encourage them. But once Ma made me look. She steered my face with her hand and pointed to an old lady smoking on the sidewalk. See that? she said. If I ever catch you with a cancer-stick you’ll end up on the street like her. Ma says I’ve got to look after my lungs and never smoke. The lady she pointed to was dressed in broken clothes and broken takkies and I didn’t want to look at her. She made me so sad. What I did instead was look at the fingernail Ma was pointing with. Her nails are very long and sharp. She paints them a different colour every week. That day they were red.

Ma only likes nice things. That’s why she got so cross when I used the swear word. I said shit. I can’t remember why, maybe I dropped something. I’m always dropping glasses or knocking things over. Ma says I’m clumsy. She says I’m so stupid she doesn’t know what she’s going to do with me. But the time I swore she got more angry than she’s ever gotten before. She said she never ever wants to hear me use that word again. When she told me that she held my hand very tight and dragged her fingernail along my arm, from the inside of my elbow to my wrist. Afterwards she said she was sorry. She wiped the blood with a cotton pad and dabbed it with Dettol. The scratch is red and bright. It matches Ma’s nails.

After the scratch, I started thinking differently. What I did was, I made an opposite thought to everything she said. That’s how I know what I like and what I don’t like. I like driving in the car with the windows open. I like trousers and t-shirts. I like very bright colours. I like playing in the garden and getting soil under my nails. I like smoking. Also, I like the people across the train tracks. When Ma is out I visit them. I squat in the shade of the gumtree and watch the children play. I keep going back even though they don’t speak to me. It’s as if they heard what Ma said.