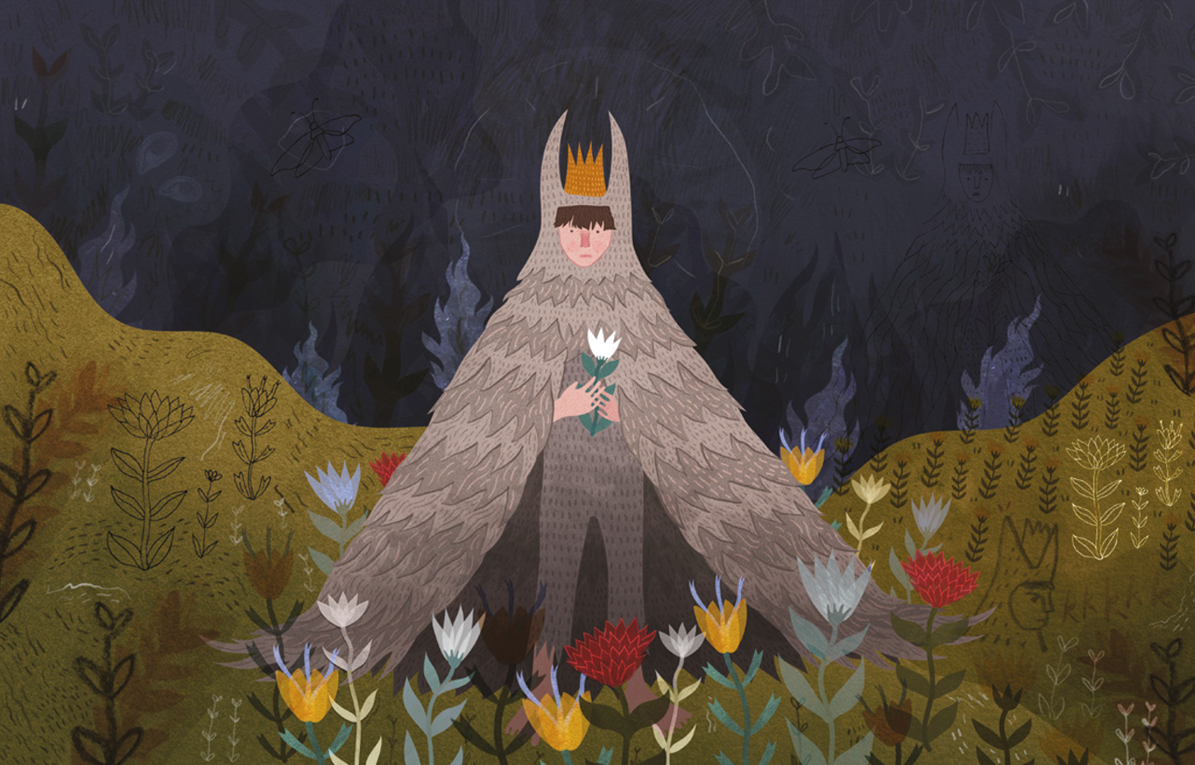 When the trucks are loud and heavy on the bridge above me, and there is too much sharp light from the metal bodies of so many cars flowing in front of me, I lean back into the shadows of the cool cement wall, close my eyes, and feel I am sitting by a river. A ripply, shiny skin is on the surface, and cool darkness moves underneath. Many years ago, so they say, the top of Table Mountain over there, was actually the bottom of a valley, and this whole place here in front of me, was the opposite of what it is now. Up was down and down was up. Everybody could have seen the river then. Not just me alone. Being alone doesn’t bother me, and I am content here. I don’t need to go anywhere because a church lady brings me food and things I need. Once when I mentioned to her about my river, she spoke about Moses and the river his mother put him in. I saw how the space between the mother and the basket got bigger and bigger as the river took the baby away. Her heart wove an invisible rope to hold on to the smell and shape of that soft little body, and the further the river took the boy the harder the pull on the mothers chest till it started to tear her open. Moses’s mother must have felt that anchoring place of her heart ripping out from behind her ribs. But even though it tore out of her chest, it couldn’t go with her child. So it stayed in the river, rolling around like a knot, her heart and its rope of longing.

This whole world is like a river full of old knotted-up stories like that, rotting and rolling slowly under the surface. And you never know what might wash up, and when. So I keep notes, about everything that comes past, in my little black books that the church lady brings. They are small enough to push into a man’s red sock. One that I have had for many years. I keep it safe by tucking it underneath me. And I never go far from it.

Where would I go anyway? If you leave your stuff alone here, skollies or police might take it away. And I have to guard my spot because it’s a good one with shelter. There’s bushes over there for going to the toilet, and trees across the road where I pick firewood. I don’t like to break trees, so that’s only when it’s very cold and I don’t have rubbish to burn.

When I was young we lived by a river in Mpumalanga. There was a big flood one year and the river washed away bridges and cars and houses. I’ll never forget that. The people wading in the rushing water, trying to take back their things. But once the river has something of yours, it gets tangled up and heavy with water, more part of the river than part of you. Then it can be dangerous to try to take it back. It can tangle you up and pull you down.

I was a small girl then. Ma told me we had to wait for the river to give back what it took. So we walked up and down the edges waiting for our things to wash out. We found a few pots and pans and suitcases. Our neighbour’s dog that had washed away came trotting back up the river three days later, sniffing along the bank as though he was also looking for something he’d lost. Everyone was amazed, and Ma had tears in her eyes when she saw that dog though she used to moan about it’s barking before. I asked Ma why she was crying about the dog who came back, and she told me a story about a lost girl who also came back. When the girl was still young and beautiful, Ma said, her mother sent her out to get some flour from the spaza shop on the main road. On the way back in the late afternoon, a man was driving by and stopped to offer her a lift. She said no, but he chased her anyway. She ran very fast, rushing noisily through the head-high grass, but he ran behind her, faster. The rustle-hush of long, dry grass whipped her face and ears. Anyone passing on the road would have seen only a car left beside the road with it’s door flung wide open. But anyway, there was no-one to see.

That night the girl did not go home. She walked along the river as far as she could go. Her mother waited and waited and three days later, when she went out in the morning to feed the chickens, she found her daughter curled around the bag of flour she had been sent out to buy. Her back was against the warmth of their kitchen wall, within reach of where her mother had sat all night, waiting for her child to come home. The girl’s baby grew in her belly, and when the time was close, her grandmother came to take it away. But the girl wanted to hold onto her baby, and she ran away along the river to hide. The birth was hard with lots of pain and blood. She hid in long grass on the sandy bank, until her grandmother had gone and so the baby stayed. And though I grew up to be a restless wandering sort of child, my mother’s house was a place I could always return to. Until Petrus came.

I am too old for restless wandering now, and most people looking at me just see a sick old woman waiting around to die, but the truth Skin of the River is that I am still wandering in another way. Up and down the river of life. Looking for my lost things, my what-evers that have been washed away, taken away. People do that. We can’t help it. We look until we die. Sometimes we go into the river, trying to take back what’s ours even though it’s too knotted up with everything else down there; then it can curl around us and drag us in. So I’ve also learned that sometimes it’s better to let some things just float by. Even though you know it’s yours. Earlier, one of those lost boys from the beach came walking along the highway. He looked like a bad omen moving towards me from far away: a dark, stick-man stepping like hiccoughs out of shimmering heat, the cars swerving around him. When he got to me, he was swinging his fists like the midnight madman, swearing and hissing. But I just waited for him to spit and moan and vomit out those chunks of death. Then he told me his begging money was stolen. So I said wait for the church lady. And when she came, she gave him cans of baked-beans, and while he sat and ate, she told him all about Jesus and that addiction is a sin. He didn’t look like he was listening. And she had obviously given that same sermon too many times, so while she was talking I fell asleep.

I dreamed about lost children, running around scared somewhere and me very hot and tired, struggling to move my heavy feet along the sandy, windy paths through thorny ankle bushes that have snakes hiding in them, looking for those children.

Read the rest of the story in  New Contrast Issue 197